Natalie’s session with Alex9 May 2018

For the past year, we have been working on Alex’s ability to make a variety of sounds and we have recently begun teaching him to say the sss sound when on the swing. When on the swing during today’s session, Alex’s rate of saying the sss sound was quite low to begin with. He would make a lot of other sounds but not very many sss sounds.  After about five minutes of hearing me say sss over and over again, Alex said the sss sound, which resulted in a loss of enthusiasm and fast pushing! During the activity, other sounds resulted in mediocre pushing, while sss sounds resulted in faster, stronger, more fun pushing! After about 20 minutes, Alex was saying the sss sound throughout the whole activity, continuously saying it whilst he was being pushed and often saying it when pushing was slowed down or stopped. Alex really enjoyed the swinging and found it super fun to go fast; he enjoyed it for 45 minutes and said 102 sss sounds during this time, compared to between 4-20 over his last few ABA sessions. Both parents and I were very excited! 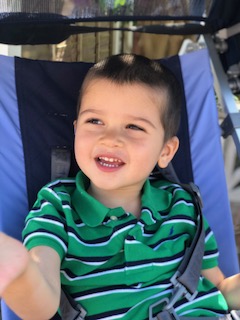