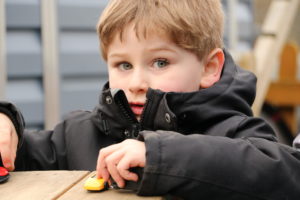 Leighton’s difficulties were prevalent at an early age whereby he would get very upset and would become difficult to settle at local baby groups.  In the months that followed, Leighton’s sleep patterns became erratic and he would tantrum multiple times during the day with family members unable to console him.  This kind of outburst became very common when Leighton was taken to any new environment.  In addition, he would refuse to eat, gag and get very upset.

At twenty-one months, Leighton was only saying the word car and would scream the word aggressively several times whenever a vehicle was in sight.  He did not respond to his name and would get agitated if anyone tried to join in with his play.  Upon starting nursery, Leighton would regularly become involved in instigating physical incidents with other children.

At two years, three months, he was referred to a Speech & Language Therapist, who recommended that the family attend ADHD and Autism groups.  He was, at this time becoming aggressive towards his younger brother – growling and trying to push him over.  Leighton was finally diagnosed with autism and significant sensory difficulties in June 2019.

Following the remarkable improvement of another child at Leighton’s nursery whose ABA programme was funded by The Playhouse Foundation, staff advised parents to investigate and see if they were eligible for funding.

Since Leighton’s ABA programme began, his tutors have taught him how to initiate play in an appropriate way.  He now has a few friends who invite him to play with them.  His need to be physical has decreased significantly and one to one tutor support has made a huge improvement.  He has now been discharged from Speech & Language Therapy as vocal work within his ABA programme has improved his vocabulary.

In a recent report written by Leighton’s parents they express their gratitude to those who have helped:  ‘When heartbreak is caused by a disability and you are unable to see the future for your loved one, you feel helpless and impotent as parents.  To then find a way to help your little boy, see proof through their progress, happiness and demeanour is the most amazing feeling.’